I’ve had so many great opportunities to speak with business owners and learn from their triumphs and mistakes, but Little Earth Productions has to be one of the best success stories I’ve heard in a long time. I had the chance to chat with co-founder Rob Brandegee about his entrepreneurial journey and the many valuable business lessons he's learned along the way, including how to know when to pivot and how to focus in on a niche market.

Founded in 1993 by Rob Brandegee and Ava DeMarco, who went on to marry, Little Earth carved out a virtually unique niche for itself: To create and sell innovative and well-designed products for the female sports fan. The story of how Little Earth evolved, and grew to inhabit a unique space in the realm of sports ephemera and accessories, is an entertaining and instructive one.

Let’s take a look, shall we?

Getting to Know the Mind of the Female Shopper

During my time with Rob, one thing became abundantly clear: Little Earth wouldn’t have become nearly as successful as it did if he and Ava hadn’t figured out how to get into the mind of the female shopper.

To hear Rob tell it, too many companies out there ignore a huge potential market for their products, and it’s all because they underestimate the diversity of their customer bases.

As it turns out, women make up about 50 percent of the entire NFL fan base – and if that doesn’t spell business opportunity, I don’t know what does! Rob points out that women have a tendency to make most of the buying decisions for their households: They buy gifts for their husbands and boyfriends, for their kids, for friends and, of course, for themselves.

Rob, Ava and Little Earth made their business work because they saw an opportunity to fill a need – and then went ahead and filled it.

That’s just the start of it, really. The words ‘men’ and ‘women’ are virtually useless in a world filled with so many ways to break down target demographics into smaller segments – and it’s understanding these divisions and subdivisions that Rob credits with the enduring success of his business. Little Earth has made a point to really understand the motivations of all kinds of women.

For example, lots of businesses are discovering the hard way that appealing to women goes far beyond painting a product pink. Little Earth goes deeper than that and creates products that are appealing to a host of reasons, such as their sustainability, build quality and uniqueness.

The crux of my conversation with Rob was his business mantra – that single spark that made the whole thing click for him. When I asked him about the most important lesson he had learned in his time as an entrepreneur, he said this: “Your business rarely turns out to be what you thought it would be.”

This really is the key, isn’t it? Rob doesn’t just offer words, he also has the experience to back it up.

In the course of building a business, lots of new avenues open up that can make it more profitable and stable – and the modern business owner needs to know when the time has come to morph into a new shape to take advantage of those avenues.

Rob goes further and points out a vitally important part of this process: You’re not looking for something that will stretch your skill set to the breaking point. Instead, you’re looking for ways to stretch your market set in new directions. In other words, play to your strengths.

Listen to our full conversation below:

Business Lesson #1: Knowing When to Pivot

When Little Earth was first getting off the ground, Rob and Ava had a lot of success chasing down and securing licensing deals with all kinds of major brands, including Coca-Cola, Playboy, Betty Boop, Elvis Presley and much more. He says the experience was OK.

The watershed moment came when Little Earth decided to make purses for the Pittsburgh Steelers. It seems like a strange gesture, but the intention was for the players to take these purses home to their wives, girlfriends or mothers. The gesture paid off in ways that the Little Earth team could scarcely have imagined.

The Steelers offered them a licensing deal, and they jumped on it. Before too long, they secured deals with other sports teams and began selling directly to the larger sports community, including stadiums, major retailers like Walmart and department stores like Nordstrom’s, all across America. With a simple gesture, the Little Earth mission was transformed virtually overnight. They had found their purpose.

We can see this same risk-taking spirit playing itself out all across the country, in a variety of wildly different industries. In some cases, it means cornering the market on emerging technologies, as Google and Ford are now doing, and in other cases, it means inventing a new market altogether.

Business Lesson #2: How to Look for New Opportunities

It might sound like Little Earth got lucky, but that’s only part of the equation. Rob admits that he hoped something would come from his purse gambit, but he didn’t really have a detailed plan or an outcome in mind when he got started. He just thought it was a cool thing to do.

That’s another key lesson we can take from Little Earth: Spotting new opportunities is a matter of flying by the seat of your pants and careful analysis. A great business requires both. Rob says he’d “rather be lucky than good,” but why can’t you have both?

For large corporations, market research and exhaustive focus testing are the keys to expanding into new markets. For Rob and other classical entrepreneurs like him, this is an expense and a burden that’s not worth either the time or the resources. Rob says no small amount of his success is owed to the regular gut checks he subjects himself to. Checking in with your gut, he says, involves not just the intuition to assess new risks and opportunities, but also the boldness to jump on new possibilities after they show themselves.

That means having an elevator pitch at the ready. In Rob’s case, it also means throwing caution to the wind and handing purses to a bunch of burly, 250-pound football players. You never know how things are going to go, but they won’t go at all without a big dose of courage.

Getting Past the Doubt

As our conversation drew to a close, Rob left me with another key piece of advice: Don’t give in to fatalism. He says there were plenty of times when the future of Little Earth was in doubt, and the same is true of any company that eventually meets with success.

However, Rob says he never stopped believing that things would work out. Anything less than that, he says, is self-defeating. 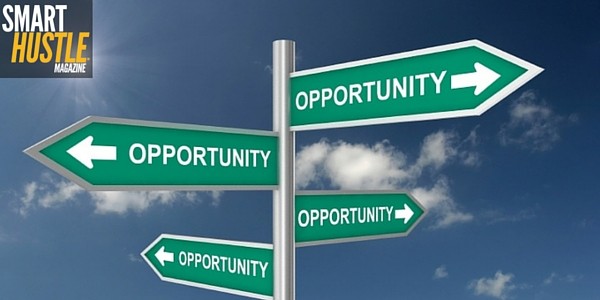 When Opportunity Knocks: 4 Ways to Grab ...